The Guerrilla Girls new exhibition was at the Whitechapel Gallery, right next to Aldgate East station. The exhibition is titled ‘Guerrilla Girls: Is it even worse in Europe?’ and is open from October til March. The gallery revisits their 1986 poster titled ‘It’s Even Worse in Europe.’ The Guerrilla Girls are a group of anonymous activists  and have been pivotal for feminism around the world. Their work highlights key issues in the design world such as sexism and racism in visual art, film, politics and culture and brings attention to these issues. 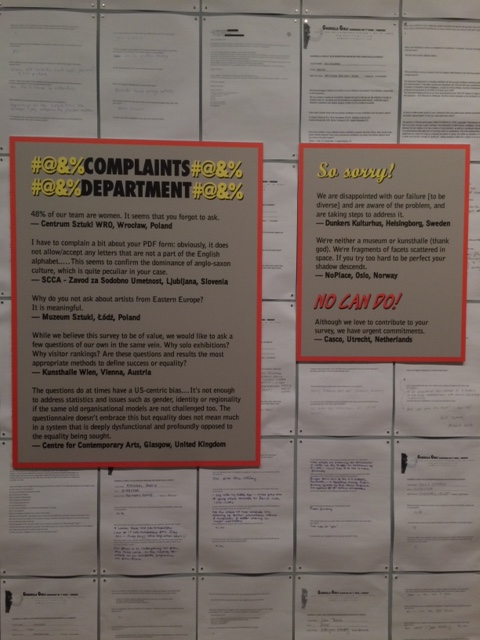 This project is based on responses to detailed questionnaires sent to over 400 directors of art museums and public galleries across Europe about their exhibitions programs and collections. The questions had been formulated to critically look at the narratives that are produced by cultural institutions. Through this extensive project, the Guerrilla Girls present new statistics on the state of museums and galleries in Europe and explore the question: Is it Even worse in Europe? (Girls, 2015)

In the exhibition the content is based a lot round their usual style of comical and bold style. The walls were covered in text and message constituting of who didn’t reply to their messages and ignored the Guerrilla Girls. I feel they wanted to highlight this issue so that people could realize that there may be some sexism in certain galleries around Europe. This particular piece was displayed on the floor so people could ‘feel free to walk on them.’ As well as highlighting the institutions that didn’t respond, they also looked at the ones that did. These ones were placed on the wall and given more of a focal point in the exhibition.

The Guerrilla Girls really go into depth about the state and potential issues surround what is going on in exhibitions around Europe. As well as sexism, other questions were asked. For example; ‘What Keeps Museum Directors up at Night?’ This was a list comprising of various reasons but the number 1 answer was #funding.

The whole gallery consisted of a really interesting aesthetic. The walls were covered in paper, with information of exhibitions around Europe and issues that seem to surrounding them. it was a generally enjoyable experience which highlighted the issues surrounding sexism and racism in art today. Even though it sounds so dated, there obviously is an issue surrounding the culture.

G, Girls (2015) Is it even Worse in Europe?. London: Whitechapel Gallery