The idea of Design Activism really intrigues me for various reasons. To me it displays a way of informing and producing personal ideas and view points to others in response to something that has occurred in society or culture. Something about how the designer/artist wants to portray a message makes me want to learn more and involve myself more in the world of Design Activism.

After looking at the idea behind Design Activism I wanted to look at an example and delve into the idea behind the meaning it. Barbara Kruger creates politically motivated work that demonstrates a feminist critique of how mass culture shapes and mediates social norms. Through the use of commercial graphics and advertising techniques, she renders visible traditional gender/power relations that often go unnoticed or unsaid. 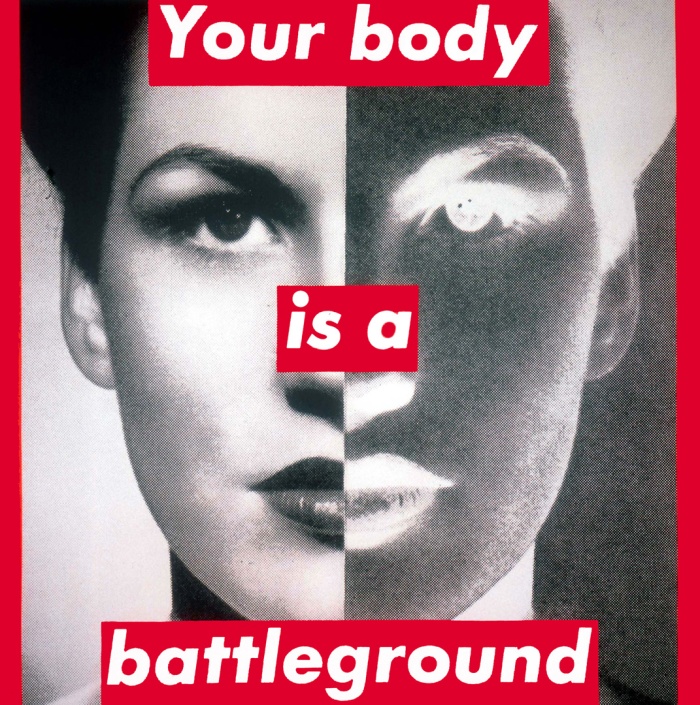 In 1989 she created the piece called “Untitled (Your Body Is a Battleground) which is to be used for the Women’s March on Washington. which supports a woman’s right to choose and the idea of reproductive freedom. Reproductive freedom is defined by  not only woman’s right to choose childbirth, abortion, sterilization or birth control, but also her right to make those choices freely, without pressure from individual men, doctors, governmental or religious authorities. Kruger’s vision of equality in society has been a frequent feature in a lot of her work which displays a powerful message by challenging the stereotypical ways mass media influences society’s notions about gender roles, social relationships, and political issues.

The image consists of a photograph split in half. One consisting of a negative photograph and the other a positive. The photograph could be defined as 2 different views of the same person, emphasizing the issue in the way it is displayed in one way and seen as another. The photograph could be seen as the same person; like a mirror reflection. This is seen as a construct of society as they are seen as pro-choice and pro-life; women vs. stereotypes; women vs. patriarchal society. The woman is looked at in 2 different ways; one positively and one negatively like the are less human and more of an object. The title of the art ‘Your Body is a Battleground’ gives the impression of a literal war that women have to go to in society and how every day the female body is beaten and broken and going through torment which they cannot stop themselves.

I feel that Kruger brings a lot of attention to the issue in society and gives a voice for women. It spreads light on gender and societal issues and the struggle of being a women. It could be said that without the text it would not have had such a strong message. ‘Your Body is a Battleground’ gives such a strong message through its corresponding text and imagery in which Kruger helps bring attention to the problem.